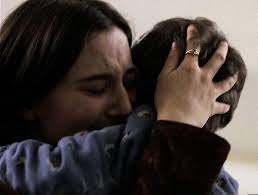 Air Date: January 10, 1997
Guest stars: Heather McComb and Jeffrey Donovan
Opening Quote: "O lord, if there is a lord, save my soul, if I have a soul."
- Ernest Renan
"The Wild and the Innocent" is an unusual Millennium episode in that Frank Black is more of a supporting character and the story feels more like a Dateline episode.
The plot involves a young couple on the run. Set in Missouri, the episode begins with Maddie's (McComb) boyfriend (Bobby) nearly killing her stepfather (Jim) after he witnessed him assaulting her. It's later revealed Jim is a serial rapist living under a false identity, which draws the interest of the Millennium Group. The episode follows Maddie and Bobby as they go in search of her son who was sold into adoption (a fuzzy plot point). But her boyfriend Bobby is also a violent man who kills people along the way in their search for Maddie's son.
There's a few issues with the episode. One is the actual plot, which is convoluted and unfolded in a somewhat confusing way. As alluded to earlier Frank and Peter Watts (Terry O'Quinn) aren't given much to do. To its credit, the episode did continue with the recurring theme of the cycle of violence impacting future generations. Heather McComb gives a strong performance as Maddie, the "innocent" trapped in a world of violence from the men in her life. Her narration provides a lyricism to the story (she sounds like Holly Hunter). The episode also begins with a nice family scene with Jordan inquiring of Frank and Catherine whether she will have a sister.
"The Wild and the Innocent" is a mixed bag of storytelling techniques outside of the show's typical purview, but still compelling as an outlier entry in the series.
Posted by Eric Gilliland at 10:27 PM No comments: 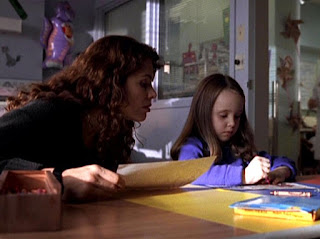 Written by Charles D. Holland
Directed by Jim Charleston
Air Date: January 3, 1997
Guest stars: Glynn Turman, Brittany Tiplady, Bill Smitrovich
Opening Quote: "His children are far from safety; They shall be crushed at the gate without a rescuer."
- Job 5:4
"Wide Open" is a slightly derivative, but still effective, episode of Millennium with Frank and Bletch on the search for a killer. The episode begins in an almost subversive matter with a house showing at an affluent suburb in Seattle. After a family has purchased the house they are murdered in terrifying fashion by a man who followed them there and hid in an upstairs closet. Real nightmare fuel. Frank and Bletch are called upon to investigate the case, while investigating the crime scene of the house Frank discovers the couple's daughter alive and well inside a vent. They realized the girl (named Patricia Highsmith after the author) witnessed everything and Bletch pushes Frank to get Patricia to talk, but Frank refuses. Catherine takes over the girl's case, offering comfort and support in her recovery from an unthinkable trauma.
The episode is structured as a cat and mouse game. The killer, fits the usual profile of a young white male reveling in his duel with law enforcement. They are able to locate the man and anticipate his further plans of targeting new houses and the capture in a suspenseful sequence that ends with his death from a fall. Frank's skills and compassion managed to win the day, Patricia would not be forced to recall the awful events.
The episode ends with a moving scene. Frank and Bletch are reflecting as the Patricia is leaving the hospital and going to a foster shelter. Bletch reveals the killer himself survived horrific abuse as a child and muses, "Tragedy begets itself."
Frank replies, "Till the circle is broken."
Jordan accompanies the girl as she leaves the hospital. Frank finds Catherine quietly weeping in her room as the camera pans to the girl's drawings, haunting sketches of how she made sense of what happened. We hope Frank is correct and cycle of tragedy will be broken, but the pain will never go away. The theme of abandoned children echoes an earlier episode "Blood Relatives" only in this case the evil comes in the form of an outside threat. The healing sentiment expressed at the end suggested hope, a faint one, but hope nonetheless.
Posted by Eric Gilliland at 1:43 PM No comments: 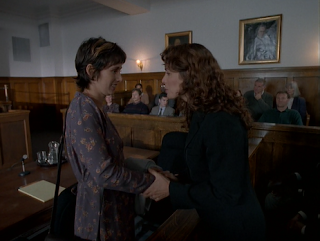 Written by Chris Carter
Directed by Ralph Hemecker
Air Date: December 20,1996
Opening Quote: "The cruelest lies are often told in silence."
- Robert Louis Stevenson
"The Well Worn Lock" is an ambitious Millennium episode dealing with power, family, and abuse. The plot deals with Judge Joe Bangs (Paul Dooley) a pillar of the community whose led a secret life as a sexual predator for years.
Chris Carter's script featured Catherine (Megan Gallagher) taking the lead and allowed Frank to be in a rare supportive role. Connie Bangs (Michelle Joyner), 32 year old daughter of the judge, runs away from home after years of surviving her father's crimes. Catherine takes on Connie's case but faces obstacles because of the judge's political influence. Later its revealed Connie's much younger sister Sara is also her daughter and is in danger of becoming a victim.
The episode resolves itself quickly with the judge being arrested after abducting Sara. The final segment jumps ahead five months for the trial, requiring a mentally fragile Connie to testify. She struggles at first, but Catherine gives her the courage make sure her story is told. The teleplay ends with Connie and Sara throwing away the lock (their safeguard against their father) into the river.
Sensitive issues of abuse within families and how victims emerge from such an ordeal do get simplified in the episode, but it is well paced with strong performances by Joyner and Gallagher. The sub theme of men in power getting away with abusive behavior was also prescient, especially considering the number of powerful males who abused women and children for years without consequences.
Posted by Eric Gilliland at 10:06 PM No comments: 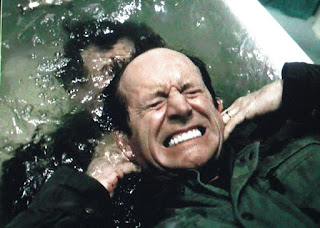 Opening Quote: This generation is a wicked generation; it seeks for a sign, and yet no sign shall be given to it . . ."
Luke 11:29
"Blood Relatives" is one of the grimmest episodes of Millennium. Filmed with a pitch black noir visual style, the story involves a series of killings targeted towards those in deep grief. The cold open begins with a funeral of a young man, a stranger named James claims to have been a good friend and comforts the family. Later that night the grieving mother is murdered.
Frank Black and Peter Watts are called in to investigate what appears to be a rash or murders following funerals. The episode allows Catherine to utilize her training as a social worker to conclude the killer is a full of rage and was probably abandoned by his parents. Detective Bletch observes that if a child has no human contact in the first two weeks of its life it will go "feral," some kitchen sink psychology the episode explores. Through a forensic investigation of the victims, Frank links the murders to a halfway house for troubled young men. In a twist Frank discovers an even more devious mastermind behind the murders.
Catherine muses that millions of parents abandon their children every year, creating a repeating cycle of rage aimed at the world. The crimes themselves are a manifestation of that rage. That's a troubling theme throughout the series, many of our own social ills come down people being deprived of the essential necessities of life - food, shelter, and love.
A potent episode, but a chore to watch due to the heavy emotional pain in every scene.
Posted by Eric Gilliland at 9:59 PM No comments: