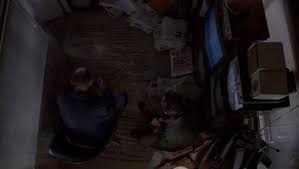 "19:19" begins with a common image in 1990s pop culture, the man sitting alone in a room with walls plastered with newspaper and magazine clippings, highlights, and diagrams all over the place. "Prine" also has multiple televisions going at the same time. Today he would fall into conspiracy theory rabbit holes on the web. The episode suggests he's having visions of nuclear war.

When a busload of children go missing Frank and Peter Watts are called in to lead the investigation in rural Oklahoma. They discover the bus at the bottom of the lake and determine the children were taken to another location. It's revealed the children are being kept in a bunker at some undisclosed location. The authorities apprehend Prine and take him into questioning, through deduction they are led to the bunker. A tornado strikes out of nowhere as they are saving the children, killing Prine. It's revealed the twister had destroyed the school - where the children would've been.

Some compelling twists and turns in an otherwise middling episode. The trope of Frank taking on an investigation in rural America had been played over quite a few times in the show's history up to this point. Darkness is usually found in the heartland, but here it's one of prophetic significance. Unfortunately, the episode never quite earns its ending since Prine is such a cypher. Lara Means (Kristen Cloke) returns, using her psychological expertise to aid the investigation.