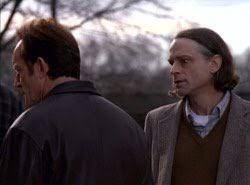 "Force Majeure" marked a departure for Millennium away from the "psychopath of the week formula" and into the realm of science fiction. The plot incorporates elements from The Boys From Brazil which explored cloning done with nefarious purposes with an additional dose of modern day biblical based prophecy.

The prologue sequence begins with a hailstorm frightening students at Washington St. University and ends with a girl self immolating herself. Unsurprisingly the bizarre nature of the event gets the Millennium Group involved. Frank speaks with a student who knew the victim who attested to her intelligence and interest in planetary astronomy, leading Frank to Dennis Hoffman (Dourif) a self-appointed expert on prophecy with a special interest in earth changes.

Dourif is compelling as usual, one of the all time great character actors. Hoffman is obsessed with the date May 5, 2000, a day he believes that a rare planetary alignment will lead to an apocalyptic flood.* After another girl self immolates herself, the forensic work makes some strange discoveries including matching astrological symbols on the bodies and that have similar genes like identical twins. It's determined they are clones, suggesting a connection to the prophecy.

This leads the story to Pocatello, Idaho because of its high sea level and long distance from any coastline, the perfect place to be in case of a cataclysmic flood. Frank and Peter Watts discover a commune with cloned girls and the leader who lives in an iron lung. He reveals himself to be the mastermind behind the cloning and that he's creating a "pure" group of humans. Frank calls him irresponsible and holds him responsible for the suicides. With the girls about to be taken into custody the bus driver is also part of the cult who espapes with all the cloned children.

Frank concludes they'll have to wait until May 5, 2000 to see what happens. He returns home with a gift for Jordan, a model of the solar system. Catherine is happy Jordan was accepted into a good school and her education is covered until she graduates in 2010, creating an uneasiness with Frank.

"Force Majeure" impressively packs in quite of plot into a 45 minute episode. Of all the shows up to that point it captures millennial anxiety with fears of civilizational altering weather. A maestro of pseudoscience like Hoffman looks to prophecy and biblical texts to explain everything. Thankfully the episodes comes down on the side of science which also models extreme weather events related to global warming. Frank seems more unnerved that people believe actually prophecy and that it leads them to extreme actions. At the same time the Millennium Group appears to also believe in the idea of end times, as Watts suggests in a conversation with Frank.

It's also notable all the cloned children are blue eyed and blonde. Iron Lung Man's obsession with purity adds a white supremacist undercurrent to the story. Of course the grand old white men views such children as pure and wants to genetically engineer them! The episode never explores the connections between a messianic complexes and racism, but it's in the subtext. The teleplay also forecasted the Heaven's Gate mass suicide that left 39 dead a month after the episode aired, acts inspired by biblical prophecy (and a whole cocktail of pseudoscience).

A compelling episode, "Force Majeure" has the ambition of a two hour motion picture.

* Link to NASA website on groundless fears that surrounded May 5, 2000:

Posted by Eric Gilliland at 4:05 PM