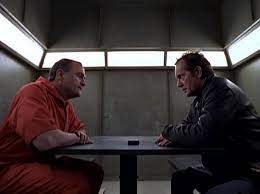 A man's past is not simply a dead history . . . it is still a quivering part of himself, bringing shudders and bitter flavours and the tinglings of a merited shame.

Another strong episode, "The Thin White Line" sheds light on a key moment in Frank Black's past and has him facing off Silence of the Lambs style with a terrifying serial killer.

The ominous prologue opens with two murders of seemingly random people. At the hospital Frank notices a slash across one of the palms of the victims, matching an identical scar on his hand. In a flashback Frank returns to his time with the FBI 20 years before when he led the pursuit of a killer targeting random people. While pursuing the suspect Frank gets his hand slashed and nearly gets himself killed. Leading the FBI into an ambush orchestrated by the killer that left three agents dead at the hands of Richard Alan Hance has continued to haunt Frank over the years through nightmares.

Veteran actor Jeremy Roberts, a familiar presence on TV in the 80s and 90s, gave a compelling and disturbing performance as Hance. As a child he moved around from foster homes and endured abuse and then served two tours in Vietnam. Based on the nature of the new spree of murders, Frank determines a copycat is behind them, probably someone inspired by Hance.

Now incarcerated in solitary confinement in where the lights never go off, he terrifies the guards. Knowing Hance could provide information on the murders, Frank visits him to get information. These scenes resemble The Silence of the Lambs. Frank is warned prison security cannot guarantee his safety when left alone with Hance. The psychological standoff Frank and Hance is a highlight of the season, even verging into the comic with the killer demanding Gary Busey play him in his life story. Eventually, Hance informs Frank the suspect is probably his former cellmate who he molded in his own image.

The episode ends with a replay of the flashback, Frank leading a pursuit into an abandoned building where he almost gets himself killed again. Luckily, Lt. Bletcher (Bill Smitrovich) provides backup and neutralizes the killer.

"The Thin White Line" ends in a suspenseful but predictable matter, but the story provides some shading to the Frank Black character. "Bletch" has been reduced to Watson type character to assist Frank, not necessarily the equal relationship established in the Pilot episode, but he does provide a steadiness to counter Frank's brooding presence. The haunting note of the ending goes back to Hance in his cell with the lights going off (a gift for his assistance in the investigation) as he grunts like a bear.

Posted by Eric Gilliland at 1:28 PM