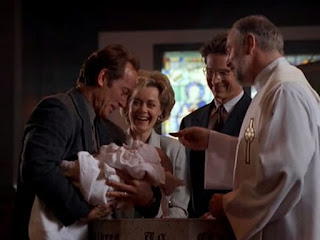 "Sacrament" from season one of Millennium brings the horror to Frank Black's family in an unnerving episode on multiple levels.

The episode begins with the festive occasion of Frank Black sponsoring the baptism of his nephew. For the first and only episode Frank's brother Tom is introduced. Shortly after the ceremony Frank's sister-in-law Helen goes missing. Meanwhile, Jordan is found sobbing and screaming inside the church. Throughout "Sacrament" Jordan appears to show signs of inheriting Frank's unique abilities, but it's not the central focus of the episode.

Surveillance footage from the airport reveals Tom and Liz were being stalked at the airport by a convicted felon with a violent history. While Bletch orders Frank to stay clear of the investigation, the Millennium Group gets involved with Peter Watts getting involved. The Seattle PD begins to keep watch on the person of interest Richard Green (Dylan Hagerty). A menacing figure with a shaved head and built like a offensive lineman in a scene walking a tightrope between terror and comedy he buys power drills at the local hardware store.

Further evidence leads to a cabin in the woods where blood samples where more incriminating evidence is found to arrest Green. More bodies are discovered at the Green household, but Helen is nowhere to be found. Seeing the tools, Frank discovers a still alive Liz was being held captive behind a wall recently built in the house. Even more distressing, Green's father is revealed as the actual serial killer, the son served as his Renfield. While Frank has managed to reunite his brother's family - they've endured awful trauma.

"Sacrament" is well paced, subversive, and ultimately redemptive in an unconventional sense. The teleplay was structured with uncanny realism from the brief moment of joy at the start to the tempered solace at the end. The murder dynamic within the Green family unit also presents an acidic take on the parent/child bond. There are also moments of true gloom and dread when the investigation takes unsettling turns. The muted drama forces the viewer to encounter Frank's world and ponder the courage it takes to understand and confront the most depraved behavior in our society.

Posted by Eric Gilliland at 6:52 PM