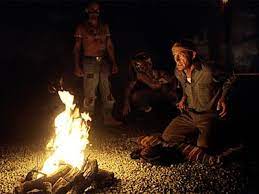 "A Single Blade of Grass" is set in New York City, featuring Frank being sent to investigate strange happenings around a Native American archeological dig. The episode begins with a young native man being given snake venom to conjure visions, but he's later found dead at the site beside a mummified body. Working with archeologist Dr. Michael (Steel) Frank traces the ritual to hotel basement.

Further investigation reveals the ritual was tied to native traditions of reviving the dead. Frank interprets symbols discovered at the ritual site as referencing a coming apocalypse on the scale of what happened to the indigenous population of North America with the arrival of Europeans. Later Frank is abducted by the Native Americans who believe his visions will foretell the future. As Frank is being forced to induce venom, the police (cavalry?) arrive and save him.

One of the more uneven, even bordering on incoherent, entry in the Millennium canon, "A Single Blade of Grass" explores compelling themes of history with little in the way of payoff. Part of the problem was Frank going solo, there's no Peter Watts, Catherine, or Jordan. Representation of Native culture, while good intentioned, comes off as superficial. The episode was reminiscent of the 1981 film Wolfen, a far more nuanced thriller which explored supernatural phenomena and indigenous culture in a modern urban setting.

Posted by Eric Gilliland at 9:16 PM