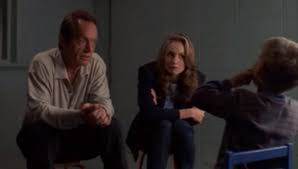 Opening Quote: "The first thing we do, kill all the lawyers." from King Henry VI Part II

"Monster" cleverly plays upon Satanic Panic phenomenon of the 1980s which often revolved around allegations of abuse at Day Care Centers. In the episode Frank is sent by The Millennium Group to Arkansas to investigate an alleged case of abuse. The music of Bobby Darin is also features, a recurring motif throughout the second season.

Lara Means is also introduced (Cloke), another consultant the group sent to Arkansas. Like Frank, Lara also has visions, but they are more of a spiritual nature. As they investigate more kids start to experience strange maladies, one boy stops breathing and dies suddenly (later ruled to be an asthma attack.) Meanwhile, back in Seattle, Catherine is unnerved after finding an unexplained mark on Jordan's mouth.

The local District Attorney suspects the manager of the Day Care Center (Penny Plott) may be abusing the children, his suspicions are seemingly confirmed when some kids confess they were abused by her. Yet with no history of abuse on Platt's record, Frank and Lara believe something else is responsible. A hysteria begins to grip the community as angry locals vandalize the day care center.

Frank and Lara's attention turns to a little girl named Danielle Barkabow since they sense a demonic presence surrounding her. I like that Lara asks if she's a Damien because of the obvious parallels to The Omen. She and Frank speculate on how a five-year-old child could be capable of committing acts of evil like murder. Is it a genetic mutation? Frank believes new forces of evil are on the horizon and their investigations are proving it.

Frank and Lara pay a visit to Danielle, as she gleefully watches the end of The Fly! Frank questions Danielle and she screams at him to get out and emerges with cuts on her face. Now accused of abuse, given more credibility by Jordan's unexplained injuries, Frank is taken into custody. Lara returns to the Barkabow household and determines Danielle inflicted the wound on herself, revealing the child as the true "monster."

In a fine display of acting, Henriksen's speaks with a quiet passion to the Barkabows about being forever changed by the birth of Jordan, pleading with them he would never harm her or any child. Frank's emotional appeal moves Danielle's Mom to admit she heard Danielle hit herself, thus clearing Frank of any charges. Catherine and Jordan also arrive in a show of support. The epilogue to the episode reveals Danielle has been adopted by members of the group.

"Monster" is a strong entry in that it allows the entire cast have standout moments that further their characters. Frank ends with a new sense of mission by having found a new ally in Lara Means and at least the possibility his family can be repaired. Lara gives a haunting soliloquy about seeing angels and the connections to The Old Testament. Further questions are also raised about the motives of "the group."