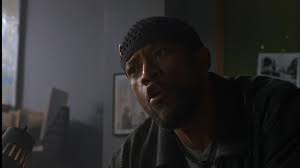 Directed by Thomas J. Wright
Written by Chip Johannessen
Airdate: October 3, 1997
Guest Stars: Ricky Harris (Gerome Knox); Clarence Williams III (Zero/Kramer)
Opening Quote: "Control of third world populations designated secret national policy" National Security Memo 200 (1971)
It was unfortunate to read "Sense and Anti-Sense" was a compromised episode. Writer Chip Johannessen talked about his script going through many rewrites, watering down the racially themed storyline, a subject Millennium rarely covered. But "Sense and Anti-Sense" does raise many pertinent questions relating to history and institutional racism in America.
In the cold open a screaming man suffering convulsions "Zero" hails a taxi, Gerome Knox (Harris) picks him up and rushes him to the hospital but gets suspicious of how the hospital will treat "Zero" when two government officials show up, so he helps "Zero" escape. Frank is called in to help with the search for "Zero" who may be a carrier for a dangerous virus - or so he's told. After Frank is exposed to Zero's blood, it tests negative for any virus. Meanwhile, homeless men are shown having strong reactions to something they were exposed to, leading Frank to believe a rogue organization could be targeting homeless men.
Working with Peter Watts, Frank connects the recent incidents with the homeless to the Human Genome Project, the ambitious 1990s scientific effort to map human DNA. Frank wonders if the project is also developing biological weapons for behavior modification. Then Knox is found dead who Frank came to trust as an ally in the investigation, he expresses anger when the coroner calls him a John Doe, stealing away his humanity. Led to the source laboratory, "Zero" is revealed to be Dr. William Kramer one of the scientists working on the project. Did his outburst earlier mean he accidentally exposed himself? Inside Dr. Kramer's office Frank notices photographs of him in Rwanda prior to the 1994 genocide.
"Sense and Anti-Sense" is a fascinating but ultimately frustrating episode because so much is suggested with little payoff, despite excellent guest performances from Williams and Harris. The opening quote from a government report about pacification and Third World, hinting nefarious motives of elites. The Tuskegee Experiments done on African Americans without their knowledge is the most infamous example, medical apartheid is a part of American history which is all too apparent during the Pandemic. Could the drug being used in the episode be a means of keeping minorities pacified? While the episode never deals directly with the issues of science and racism, it does cast shade on the Millennium Group for its unclear motives and secrecy.
The episode ends with Frank and Peter talking about Rwanda, Frank wondering what could suddenly cause people to turn on each other without warning? Peter simply says we all have the switch within us, and it can be switched at any time. Living in a culture now overloaded with conspiracy theories, the questions raised in the episode about science could be the makings of an agent of misinformation on social media, spreading paranoia like a virus.
I'm not arguing Millennium or The X-Files were simple fodder for the tin foil hat crowd or tools of misinformation, both shows were designed for entertainment and tackling questions of the particular historical moment. Being suspicious of "Big Pharma" doesn't mean refusing vaccines or an anti-biotic that will cure a dangerous infection. It does mean demanding trust between citizens and institutions. When there's a lack of trust and transparency with historical precedents to boot, it leads to dysfunction cascading across generations.
NPR Article on Medical Apartheid - https://www.npr.org/2020/12/20/948614857/race-and-the-roots-of-vaccine-skepticism
Vox Article on Public Perceptions of Big Pharma in 2021 - https://www.vox.com/policy-and-politics/2021/4/2/22362078/covid-19-vaccines-pfizer-pharma-companies-popularity
Posted by Eric Gilliland at 3:43 PM