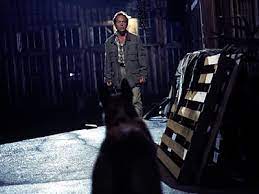 "Beware of the Dog" serves a few functions that suit the template of season two: a comedown episode after the heavy going premiere ending with Frank and Catherine separating yet at the same time includes quirky humor to counter the "end times" motifs the episode explores.

The cold open is especially idiosyncratic. A retired couple are attacked by a pack of dogs in their camper as "Close To You" by The Carpenters plays on the non-diegetic soundtrack. A brief scene with Frank and Catherine pondering their future and that of their house, which Frank refuses to live in because they are separated (Catherine plans to temporarily live with friends with Jordan). Peter Watts calls Frank and insists he go investigate the string of dog attacks.

The town is prototypical 90s television in the vein of Northern Exposure and Picket Fences with the diner serving as town center. Eccentric locals believe Frank is the Sheriff because he looks the part (I can see shades of Gary Cooper there). We're also treated to a scene with Frank listening Bobby Darin, his favorite singer perform "As Long As I'm Singing". Frank also meets Mike Beebe (Stone) who moved to the town to escape the chaos of L.A.

In a menacing sequence Frank is pursued by a pack of dogs. Bitten in the leg and rendered unconscious, Frank overhears the townspeople discuss the reign of terror being enforced by the dogs. Discovering the millennium group symbol while exploring the woods Frank encounters "the old man." Portrayed by R.G. Armstrong, the old man is revealed to be a member of the millennium group, Armstrong's archetypal performance as the mystical old man is cut from American mythology: the frontier philosopher.

The old man informs Frank the dogs are a manifestation of the evil taking root on the planet. He speaks of good and evil and the importance of balancing the two concepts. The location of Michael's house is revealed to have a strange energy that attracts the dogs. Blind to the threat, the people of the town lack the insight to understand the threat facing them. They hope it will just go away (sound familiar).

Frank believes he's lost his gift, but the old man predicts it will come back stronger than before. The episode climaxes with Frank impelling Michael to move out just as the dogs surround the house. The old man shows up and burns down the log cabin. They leave the house as it burns with the dogs staring them down reminiscent of The Birds. In the final scene Frank appears to have achieved a renewed hope in reuniting his fractured family.

John Kenneth Muir's essay in Back to Frank Black, a collection of excellent essays on Millennium, explores the animal symbolism in season two. Muir connects the focus on animals in season two:

In Western societies of the Middle Ages, in particular, animals represented specific traits and could therefore be utilized as symbols to convey moral and religious lessons in works of art. Animals can represent victims of technology, industrialization, or war (196).

"Beware of the Dog" inverts the idea of canines being man's best friend - they can also pose a dangerous threat. There's also the comical irony in Michael's failed attempt to find peace in rural America and discovers the small towns carry their own horrors. With strong performances from R.G. Armstrong and Randy Stone, "Beware of Dog" stands as a solid entry for Millennium's second season.

Posted by Eric Gilliland at 6:51 PM