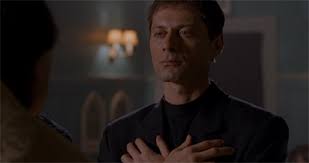 Although "Sympathy for the Devil" does not appear on the soundtrack for "Maranatha", the cold open could be an extra verse in the legendary Rolling Stones song about an evil entity influencing the course of history. For the episode begins on April 26, 1986, the night of the Chernobyl explosion and suggests the antagonist of the episode Yaponchik may've been behind the nuclear disaster.

The Christian Orthodox music used throughout the episode; however, suited it better than rock and roll, (which Millennium would pivot towards in the second season) achieving atmosphere and evoking mystery. Set within the Russian community at Brighton Beach in Brooklyn, the Millennium Group is called in to assist the NYPD after a series of violent shootings.

Yaponchik, a Russian with ties to the mob, becomes a person of interest. Working with a private investigator (Surov) who's familiar with Yaponchik, Frank witnesses another shooting at a nightclub. Peter Watts informs Frank the Russians believe Yaponchik is an evil figure from folklore, later suggested to be the actual anti-Christ.

A "V" symbol (looking like it belongs in a Thomas Pynchon novel) are also found on street graffiti throughout Brighton Beach, Watts links the symbol to early Christianity. Further investigation links to Yaponchik to the Chernobyl disaster, which Watts theorizes could be connected to references in the Book of Revelation, the New Testament book dealing with the apocalypse.

Frank believes Yaponchik is a terrorist angling to become a kingpin in the underworld. But the elusive Russian is revealed to be a high level official at the consulate with diplomatic immunity, taunting Frank by revealing he knows things about him like his stint in a mental hospital.

After another murder spree at a bathhouse, Surov shoots Yaponchik in the head but fails to kill him. Yaponchik's survival could be in line with a prophecy that says the anti-Christ will survive a head wound. At the hospital Surov decides not to kill Yaponchik and instead helps him escape to a helicopter leading to a dramatic ending and another ominous clue.

"Maranatha" continued to push the possibilities of what Millennium could be as a series by venturing into international intrigue and ancient prophecy. The look and feel of the episode are cinematic with Frank often in the background of the action. Although some of the coincidences in the teleplay felt a contrived and on the nose, they created suspense.

There's also flashes of The Omen and the James Gray mob film Little Odessa that also took place at Brighton Beach. "Matanatha' also captures a specific 1990s moment in relations between America and Russia, Watts worries about the chaos in post-Soviet Russia could lead to a dangerous new leader to emerge from the power vacuum. The late, great Bill Nunn guest stars as a NYPD detective, but unfortunately has little to do.

Email ThisBlogThis!Share to TwitterShare to FacebookShare to Pinterest
Labels: Little Odessa, Millennium, Season One, Sympathy for the Devil, The Omen, Thomas Pynchon