Millennium: Season Two: Episode 1: "The Beginning and the End" 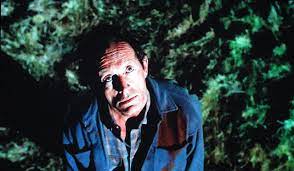 Millennium's lead off episode for its second season "The Beginning and the End" serves as a frenetic overture for an unforgettable season of television.

Picking up immediately where the first season finale "Paper Doves" left off with Catherine being abducted at the airport, it's revealed the Polaroid Man approached her posing as a religious fanatic handing out literature and got close enough to drug Catherine with a chemical agent. Frank realizes time is short as he searches for Catherine at the airport, only managing to get a description of her abductor. The Seattle police set up roadblocks (to no avail). Members of the Millennium Group show up, the first time so many members have intervened, indicating the larger role the group will play in season two.

Peter Watts also arrives to help with the investigation and acts as a confidante to Frank - in a heartfelt conversation they have on sacrifice. New software gets installed into Frank's computer that allows him deeper access to the Millennium Group's files, Watts leaves Frank alone to do his work. Meanwhile, the Polaroid Man torments Catherine at his house, deceiving her to believe Jordan was also kidnapped.

Frank's psychic visions lead him to the first house he and Catherine lived at in Minneapolis that's since been abandoned. A police raid finds nothing, but Frank finds more polaroid pictures leading him to the correct house. He goes in alone and finds Catherine tied up, in a fit of rage Frank stabs the suspect to death after a struggle. Back at the Yellow House, Catherine informs Frank they must separate to sort things out. Frank leaves the house all alone driving into the darkness.

Despite some leaps of logic and plot contrivances, such as Frank's visions allowing him to locate Catherine in record time, Henriksen's performance evokes a character at their darkest hour. It's also suggested the Millennium Group and the Polaroid Man are connected in some way, Watts reveals the man's been targeting Frank's family because of the group's interest in him. Little is revealed of the Polaroid Man except that he's highly educated and eludes most profilers. What else does the Millennium Group know?

The cosmic prologue featuring animation of an asteroid heading towards Earth also sets a great tone for the apocalyptic themes of the new season, given further impetus by the use of "Life During Wartime" by The Talking Heads.