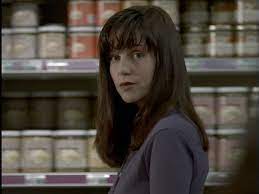 Traumatized in the days following the murder of Detective Bletcher, Frank is reluctant to take on another case. In many ways the episode is a direct follow up to "Lamentations" with evil forces continuing to close in on Frank. The series has entered into a new realm, into the mystical and theological.

A bloody episode with an unsettling motif of throats being cut including an innocent bystander, an accused murderer, and a member of the Millennium Group. Very bleak.

The elliptical structure of the script adds to the sense of disorientation. It begins with Frank witnessing the shooting of nefarious lawyer Alistair Pepper followed by a flash of white light. Then a rewind to four days earlier with Watts informing Frank of a murder scene rife with occult symbolism. Watts also spotted the young man we saw earlier in the cold open, who will become known as Sammael.

After a young woman is murdered at a park in broad daylight, the suspect is apprehended, a disturbed young man named Martin is apprehended. But Frank questions whether Martin actually committed the crime. Later Martin is shown cutting his own throat in his cell, but the forensic evidence suggests he died of an aneurism. To further complicate things Martin confessed to the murder of Detective Bletcher.

Martin's lawyer Alistair Pepper takes an interest in Frank, even offering him a job. Suspicious of Pepper, especially after he visited Catherine and Jordan, Frank suspects his motives. Meanwhile someone's been imitating Frank's voice on the telephone leading to the death of Mike Atkins (appeared in Gehanna) who was also stabbed. Chasing a suspect to a grocery store Frank sees Pepper and also Lucy Mercer who appeared in the previous episode. Shape shifting appears to be at play.

Lucy Butler looms large in the mythology of Millennium, she seems to symbolize the ultimate force of evil (equivalent to Stephen King's Man in Black). It's suggested she's behind all the evil machinations of the episode - and possibly the entire series.

The episode's title refers to dense Christian theology on the hierarchy of angels, leading Frank to conclude there's a larger fate at hand that he doesn't fully understand.

So much is packed into the episode, many of the most important moments happen offscreen. Loaded clues and red herrings, the series had moved from a procedural but into the realm of supernatural mystery in the vein of The X-Files, Kolchak: The Night Stalker and Lost. Millennium drew upon Jungian archetypes, history, theology, and mythology to separate itself from other network TV of the era - which it would build upon in the second season.