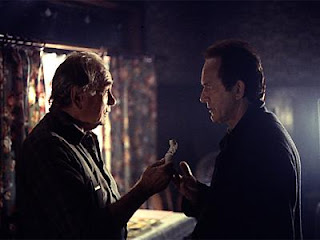 "Midnight of the Century" takes place over the Christmas holiday of 1997 as Frank Black once again faces his past in a reflective and ultimately emotional episode. The episode smoothly captures momentary respite the holiday season can provide. Like "The Curse of Frank Black" we learn more about Frank's past.

The teleplay begins with Frank preparing for Christmas, shopping for gifts, and decorating his house. He goes to a holiday party at Peter's and finds him reflective and pensive about the passage of time. Lara Means is also at the party, she and Frank discuss their conflicting feelings about the holidays. Frank confides that Jordan probably has his gift and he's unsure of how to handle it, Lara sees it as a blessing since her parents never had any understanding of her gift.

The stress of the holidays triggers memories from Frank's own childhood. He faces the fact his mother also had visions and was ostracized by society and her own family. His father Henry never understood her gift and would react with anger and contempt towards his wife. When Catherine informs Frank they received a note from Henry, Frank reluctantly goes over to visit him after years of silence.

In one of the best scenes of the entire series, Frank has a melancholy but ultimately emotionally reconciliation with Henry. Henriksen and McGavin are mesmerizing as they speak honestly with each other, Henry confesses regret at not understanding his wife. Frank comes away with some closure and they bond over Jordan. Reunited with Catherine and Jordan at a midnight mass, it's revealed Henry has passed on as Frank and Jordan witness his spirit passing by.

Mark Snow's music creates a mood that's both comforting and haunting, similar to Danny Elfman in The Nightmare Before Christmas, but less playful but more cathartic. There's a humorous scene when Allan Zinyk returns as Brian Roedecker, part of the Millennium Group's Geek Squad, as he and Frank analyze Christmas themed slasher movies (Do profilers watch them for research purposes?) A first-rate production from beginning to end, well-acted and sharply written, nicely evoking the spirit of Millennium with the rituals of the holidays.

Posted by Eric Gilliland at 2:40 PM