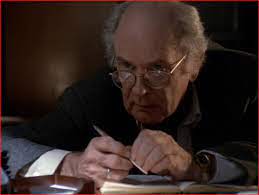 Written and Directed by Darin Morgan

Fun is rarely an adjective one would use to describe an episode of Millennium, but "Jose Chung's Doomsday Defense" is a sharp self-parody of the series, written with the precision of a peak era Simpsons episode.

The episode is narrated by cult writer Jose Chung, played brilliantly by Charles Nelson Reilly, in a performance that earned him an Emmy nomination. Reilly was reprising the role of Chung who had earlier appeared in the The X-Files season three episode "Jose Chung From Outer Space." The character took elements of Reilly's own persona and a composite of cult writers from the post-war era, thinking Truman Capote or George Plimpton. He writes non-fiction bestsellers on perplexing social trends like self-help gurus and conspiracy theory culture. Chong's latest book is about new religions springing up around the turn of the Millennium, which brings him on a collision course with the actual "Millennium Group."

The amusing prologue tells through a montage the life story Onan Goopta, a struggling writer of detective fiction who went on to invent his own religion named "Selfosophy," a system designed to program people to eliminate negative thoughts. Goopta's story is clearly a satire of L. Ron Hubbard, the famed Sci-Fi writer who went on to start Scientology. Chung's current book satirizes Selfosophy, partly from his own experience since he knew Goopta when they were struggling writers. A member of the group was excommunicated and later found murdered for reading a short story Chong wrote satirizing modern cult movements.

A series of surreal crimes occur that draw in Frank and Peter Watts. In one fantastical scene we get a rare glimpse of Lance Henriksen breaking character, playing an exaggerated version of Frank Black making wisecracks at a crime scene. When Chong is confronted by an angry follower of Selfosophy for lampooning their beliefs, Chong concludes humorless people are the most dangerous ones. Chong is also interested in the Millennium Group but promises he won't write about them, but you can imagine his interest as a writer. The group itself would make a good chapter in his book (Watts is quick to point out the group is not seeking publicity). Frank reminds Chong they are alive at the most crucial moment in human history, but Chong reminds Frank everyone from every age thinks they are alive at the most important time.

Unfortunately, Ching doesn't survive the episode, but his book Doomsday Defense gets published posthumously. The episode ends with Frank reading the book, Ching's final prediction about the next millennium, "one thousand years of the same old crap."