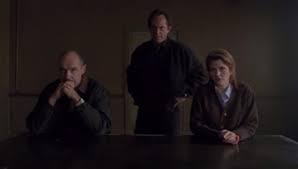 "The Pest House" takes place mostly in a mental institution, taking the familiar horror movie premise of a mad killer on the loose in a hospital and attempts to turn it inside out. The show begins with a play on the lover's lane urban legend of a teenage couple getting murdered by an escaped mental patient. Frank and Peter suspect the crime was connected to a nearby asylum which holds a man who committed similar offenses. Their investigation predictably leads them towards a supernatural resolution.

Episode director Allen Coulter skillfully used the hospital setting to create a creepy atmosphere with some moments of levity. The meta-horror quality of the episode was also much in vogue with the 1990s, especially Wes Craven's Scream released a few years before. At the same time the episode felt a bit labored and repetitive with an anti-climatic conclusion. Also, "The Pest House" is a stand alone episode existing outside the main arc of the season, somehow making the stakes seem lower. If the episode had leaned a little more into the comical direction of a previous episode like "Jose Chong's Doomsday Defense", the concept may have worked a little better.

Posted by Eric Gilliland at 1:48 AM